Few years ago, I was searching for a good third party loading platform to use in selling load to all networks. I was comparing several platforms such as Epinoyload, LoadCentral and some other Networking loading business. For several weeks of research, I ended up using Epinoyload until now.

Why Epinoyload and not LoadCentral?

Epinoyload and LoadCentral are considered as leading third party loading platforms in the Philippines. But I prefer using epinoyload over Loadcentral because it has really good features that loadcentral doesn’t provide.

Epinoyload currently has BDO, SmartMoney , or Paymaya to SmartMoney as replenishment options. Their BPI account has been closed due to new transaction fees imposed by the bank. You just have to send the correct syntax code after deposit and your load wallet will be credited in just a matter of mins. given that you’ve sent the right syntax code. If you want to be a retailer alone, you can actually buy load wallet from me thru money remittances.

You can sell load to all networks, cignal prepaid, kuryente load, cherry credits and can even pay bills .

There are several options to load your customer as well such as load thru fb messenger, android app that has online and offline features, Viber , and thru text.

One of the best features I like with epinoyload is that you can load thru text even without regular load balance(depends on sim being used) or you just have to maintain at least 1 peso in your regular load. No extra charges(again depends on registered sim card).

One of the reasons why I choose epinoyload for my loading business is that every time I sell load to my customers, there is no delay. Some third party loading platform specially networking type of loading business would definitely encounter a lot of transaction delays(system queuing). I like how epinoyload system works. they have a lot of gsm numbers and multiple gateways making their system process the transactions faster compare to their competitors.

Many ways to earn

They also offer good opportunities so their members could earn in different ways including 2% up to 2.7% rebates every replenishment , earning 10% or more when you sell load, you can also activate UNLIMITED retailers, you can even sell load wallet to your members, and you can get shares from your members too . I made a separate page for the detailed information about loading business here. Although selling prepaid load could not really make you rich, but it really helped me earn an extra income while doing my full time job.

Loadcentral has advantages when it comes to load wallet replenishment since they have bpi, bdo, metrobank and smartmoney. Same as epinoyload, you just have to text the correct syntax code. But I usually deposit thru bdo which is one of the replenishment options for epinoyload so I am still fine with it.

LoadCentral still has advantages with the available products to sell since they have skydirect and some additional prepaid products. But it doesn’t really matter to me since most epinoyload products are fast selling.

Some of my members are from loadcentral and few of them said that they experienced transaction delays. LoadCentral is way bigger than Epinoyload and that might be the reason why some transactions are delayed.

They also offer different ways to earn but no that much as epinoyload. Using epinoyload platform can make you expand your network faster since your members can still activate their own retailer. LoadCentral don’t offer such kind of opportunity.

I am a virtual assistant, blogger, wordpress web designer, and an email automation expert. I am open for freelance job or project. Contact me thru my website www.francisjakemartinez.com or my email jacbizer@gmail.com.

Why a eloadinone loading business is a perfect business for everyone? 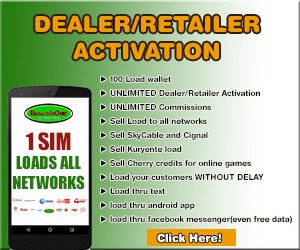